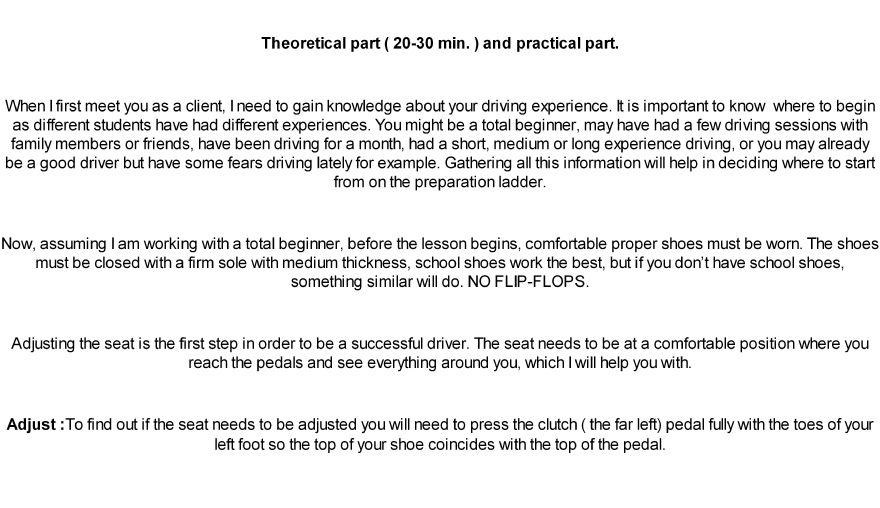 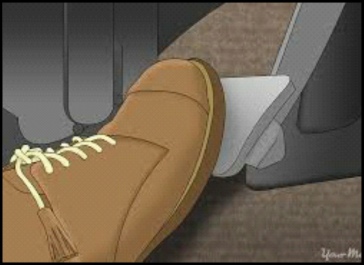 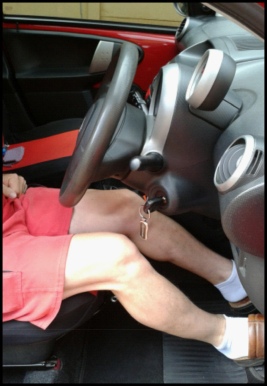 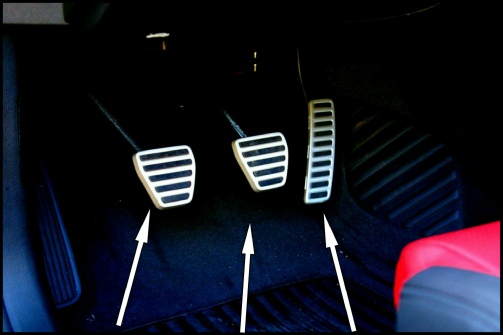 We use a gear lever, hand brake, steering wheel and indicator. 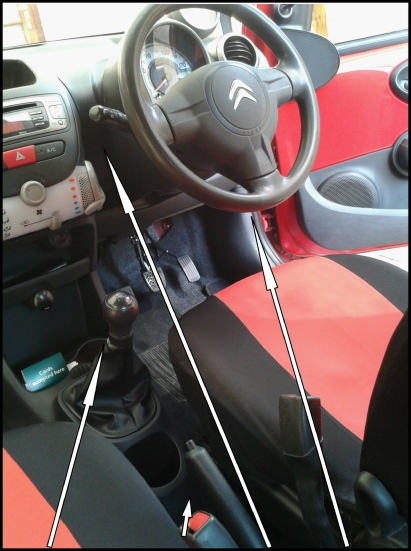 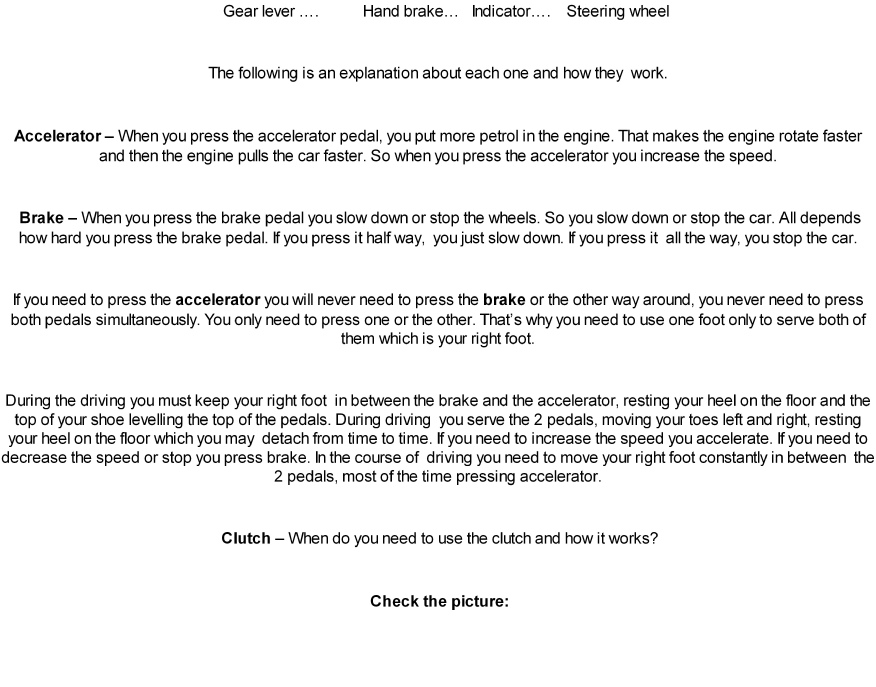 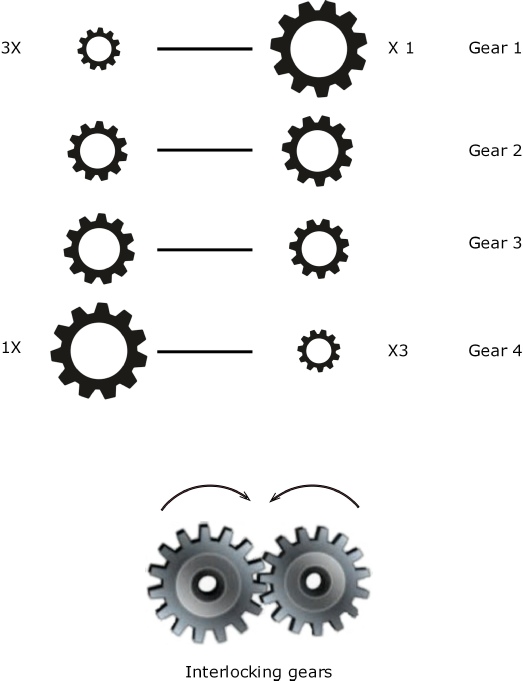 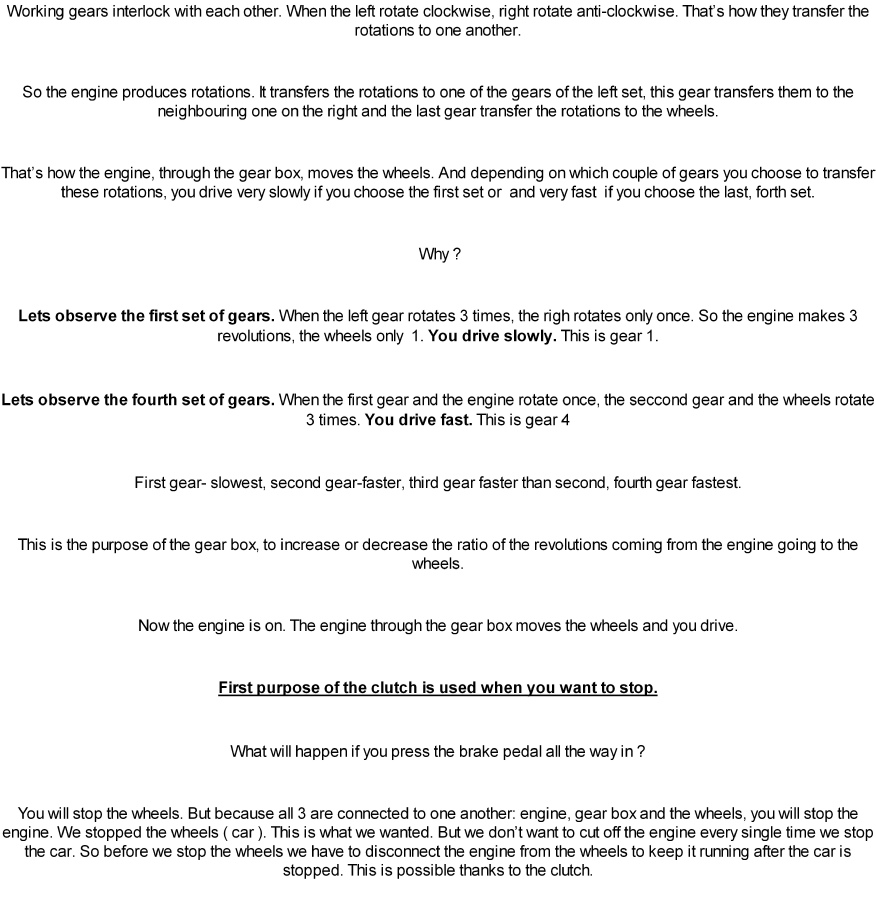 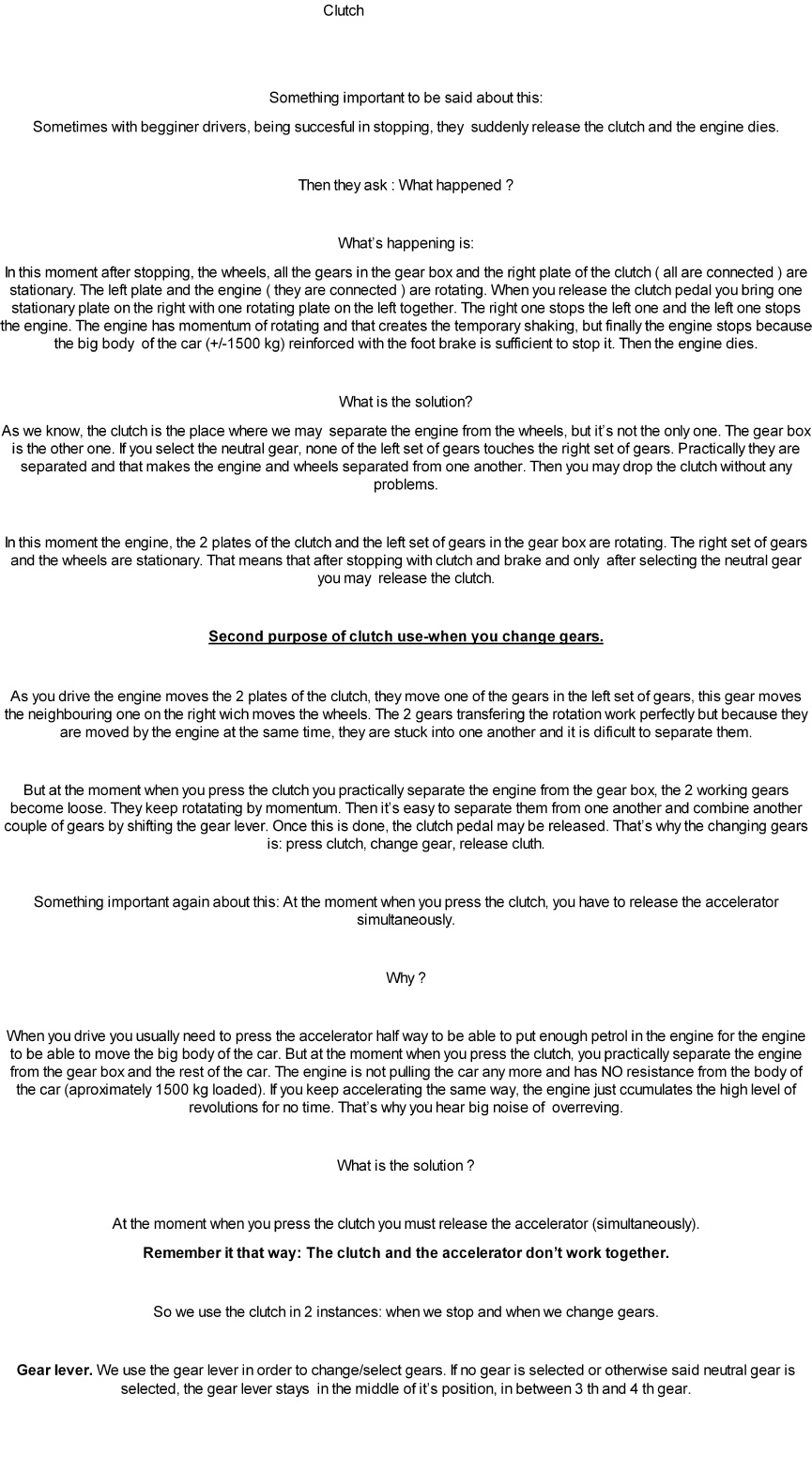 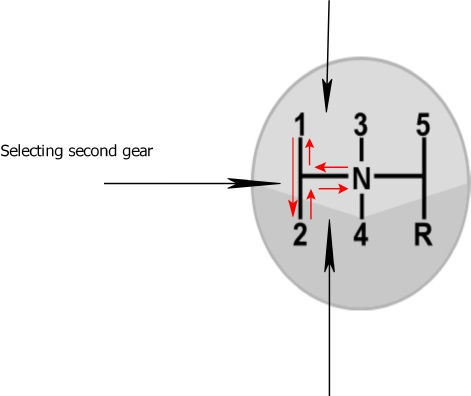 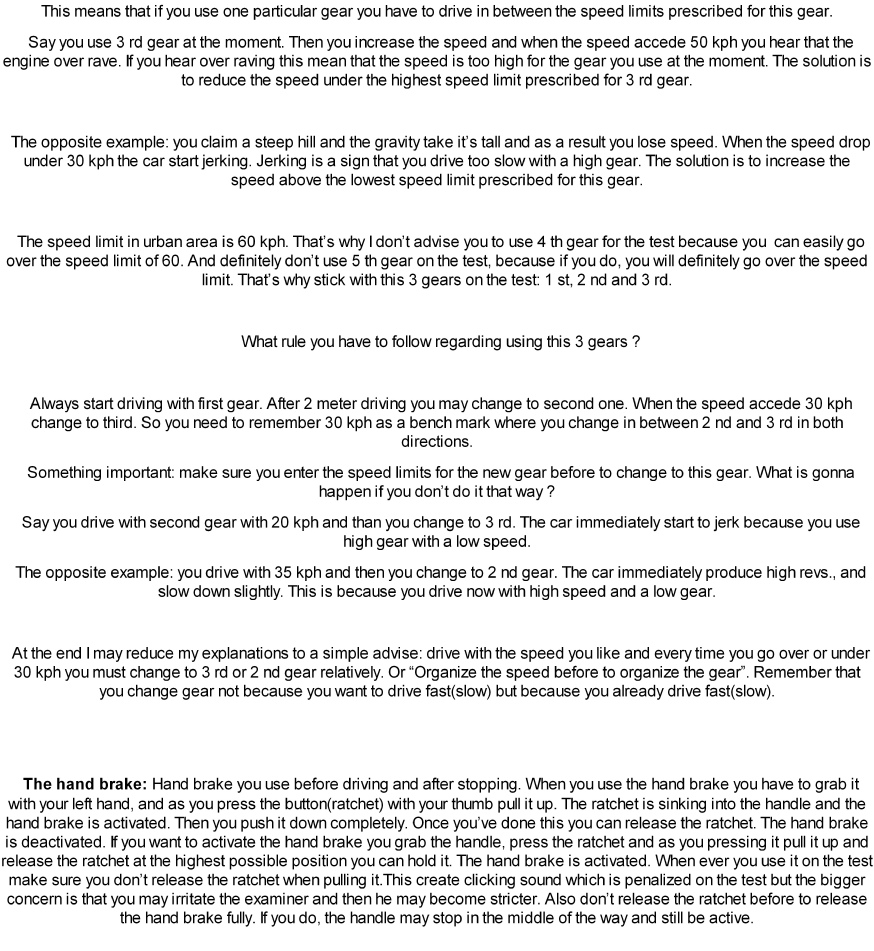 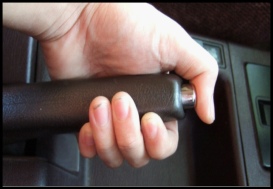 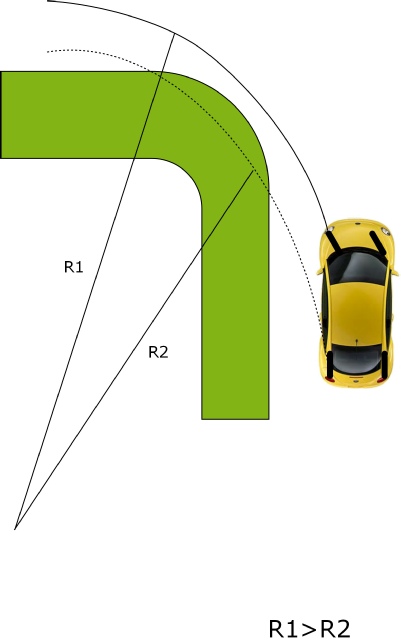 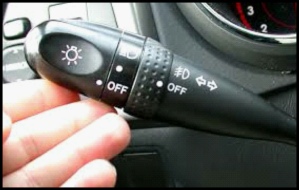 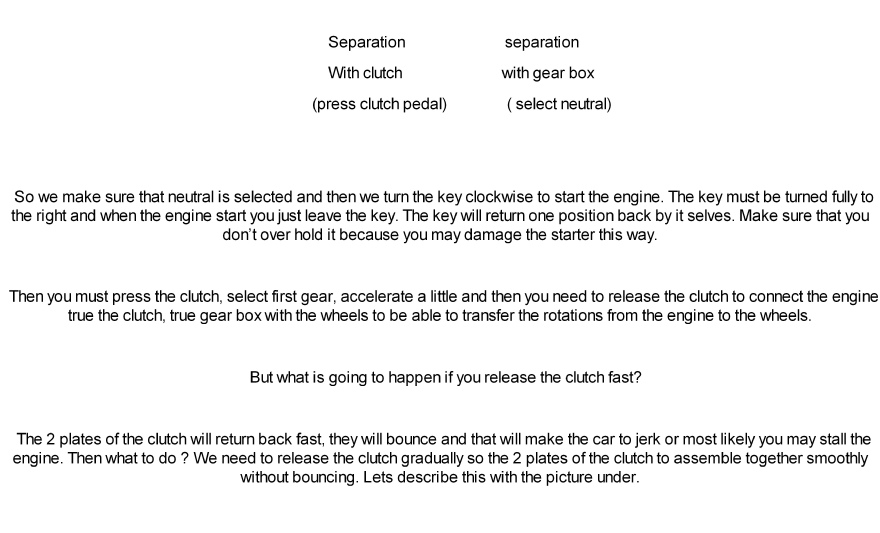 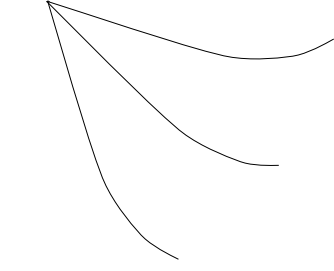 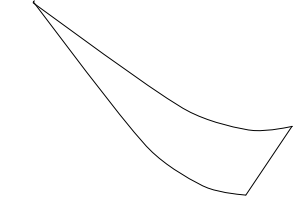 From this moment you have to release the pedal very slowly for about 2 centimeters. When the pedal is at this new position 100 % of the rotations of the left plate are transferred to the right plate and even if we release the pedal fast after this point the plates will not bounce, they will rotate as one and the car will not jerk. This zone in the middle I call friction zone. The position of the pedal there is FRICTION POINT. We must remember this point in a future.

There are 3 ways to release the clutch:

1. By lifting the heel of the floor

2. By sliding the heel on the floor backwards

3. By sticking the heel on the floor and releasing the clutch pedal by moving our toes backwards.

The first one is worst. If you adopt it you are in trouble. You will cut the engine often until you get use to and it’s quiet likely to roll on the test. In South Africa this is instant fail. That’s why the people usually fail the driving test. The last one is the best.

What I advise you is: Press the clutch with your toes fully, then step with your heal on the floor firmly and after selecting gear and accelerating release the clutch by moving your toes outwards slowly until you reach the friction point. This is the place where the car start to move slowly. Once the car start moving stop the pedal where it is and after 2 meters of driving you may release the clutch pedal slowly. That’s how you start driving.

Now the rest of the lesson is practical-driving with first gear. In a process of driving from time to time I must explain you few things: 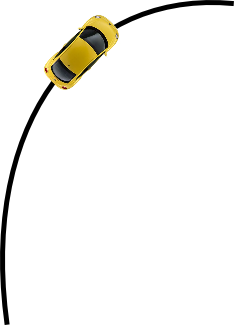 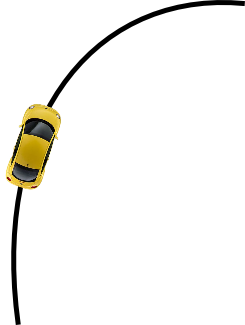 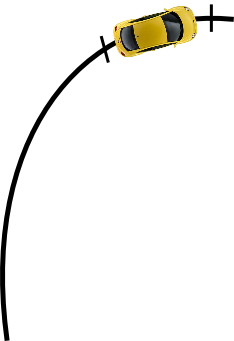 When it is a down hill you need to slow down more and accelerate later because the gravity try to increase the speed. But in general you reduce to the middle and increase from the middle.

- Slowing down and stopping. Most of the time when you drive fast and then you need to stop or it’s down hill and you need to      stop you have to combine slowing down followed by stopping. How you slow down-by pressing the brake only. Remember,      this is the best way to slow down and that is how they want you to slow down on the test. How do you stop- by pressing      clutch and brake. So you are approaching stop sign on down hill or you drive fast for example. First you apply brake and      about 5-6 meters from the stop line you apply clutch and brake.

For the rest of the lesson you drive as you stop from time to time to practice stopping and taking off. After stopping you go to neutral gear and release the pedals. Then you take off and drive again.